Related links: [May 27 to 30] A Renewal of the UNESCO Biosphere Reserve Status? The Jeju Sea is being killed now.

Navy and companies’ illegal dismantling of damaged caissons on the sea

1. Maintenance of UNESCO Biosphere Reserve despite massacre of nature?/ People’s letter to the UNESCO

Despite great mass killing of UNESCO sea creatures in the Gangjeong Sea, Jeju, it is reported that the UNESCO International Coordinating Council of the Man and the Biosphere program (MAB) adopted the report by the Jeju Island government in its eval‍uation on May 28, 2013. The eval‍uation is held every 10 year. The Jeju Island became to continue to hold the title of the UNESCO triple-crowned: The Biosphere Reserve, World Natural Heritage and Geology Park. Please see the very related and important  post regarding the matter of the UNESCO renewal , here.

The Jeju Island was designated as the Biosphere Reserve in Dec. 2012. The total designation area is 30.94㎢, which is about 45% of the whole area of the Jeju Island, It includes the Halla National Park, Youngcheon (Young Stream), Hyodoncheon (Hyodon Stream), Moonseom (Moon Island), Beomseom (Beom/ Tiger Island), Seopseom (Seop Island) that were designated as the CORE Biosphere Reserves in 2012. (See the same article of the Jeju Internet News linked above)

The National Network of Korean Civil Society for Opposing to the Naval Base in Jeju Island has sent a letter to the UNESCO MAB secretariat as of May 29, to request the UNESCO ‘objective reviews on the Jeju Biosphere Reserve,’ concerning about the ‘destruction and pollution of the Jeju Biosphere Reserve in relation to the Jeju Naval Base construction.’ Please see the letter in English in the site (Please scroll down mouse until you see the English part).

‘Inconsistent maps of the Biosphere Reserve buffer zone brings confusions and raises doubts on the Government’s performance on monitoring the management and preservation of the entire Jeju Biosphere Reserve.” (See the letter for details)

Thirdly, it raised on the matters of ‘pollution and damages of adjacent waters by the Jeju naval base construction,’ with the examples of unreliable silt-protectors and mass-killing dismantling works of damaged caissons on the sea.

Despite the letter, according to the the Jeju Island government who stated on May 29 , “the UNESCO MAB-ICC made an overall eval‍uation that ‘the Jeju Island is faithfully carrying out the Biosphere Reserve network rules and regulations,’ according to its advisory committee eval‍uation result. The MAB-ICC adopted the periodic reviews from the six regions of Canada, Germany, India, Paraguai, Mexico, and Jeju Island, among 55 regions, without special demand items. It adopted periodic reviews from the other regions with recommendation and demand items.” the same article reads. (See the article)

According to the article, ‘the Jeju Island government delivered that it included the physical character of the Island’s Biosphere Reserve; types of creatures’ habitats; activities within the Biosphere Reserve; activities on study, monitoring; education & training and public relation; management, policy, budget on its biosphere reserve.’ It also added that it ‘introduced Gotjawal, Oreums, inner land wetlands, and soft coral habitats as the habitats of special concern, while introducing stone culture and sea-diving women’ lives as its traditional culture.’

Did they ever report on the current on-going destruction and killing of UNESCO Gangjeong Sea by the naval base construction(destruction)? Probably NONE but with lots of cheats ! The UNESCO is dammed to be cheated by the Jeju Island and ROK governments. You may see the ROK government document to the MAB-ICC, here, which conceals many serious matters of ROK government’s environmental destruction in the UNESCO Biosphere Reserve, especially in the Jeju.

2. People file for a lawsuit against the navy and Samsung

On May 31, the ROK Day of Sea, some groups such as the Office of Jang Hana, National Assembly woman, Hot Pink Dolphins, and the Gangjeong Village Association filed for a lawsuit accusing the ROK navy, Samsung and Daelim, especially in relation to the navy and companies’ massacre of sea creatures with their thoughtless dismantling works of damaged 6 caissons, which started on May 5, this year, the Children Day in Korea. (See the accusation document in Korean, here).

The groups along with the members of the Seoul and Gyunggi branches of ‘Gangjeong Friends’ also had a press conference in front of the Seoul Central District Prosecutors’ Office on the same day. 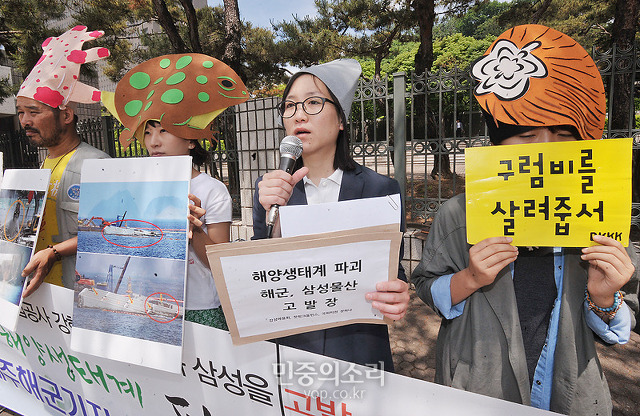 Jang Hana, National Assembly woman talking and holding accusation document against the navy and corporations such as Samsung C & T, during the press conference on May 31.  People wore the hand-made hats of endangered species in Gangjeong by the naval base construction(destruction) 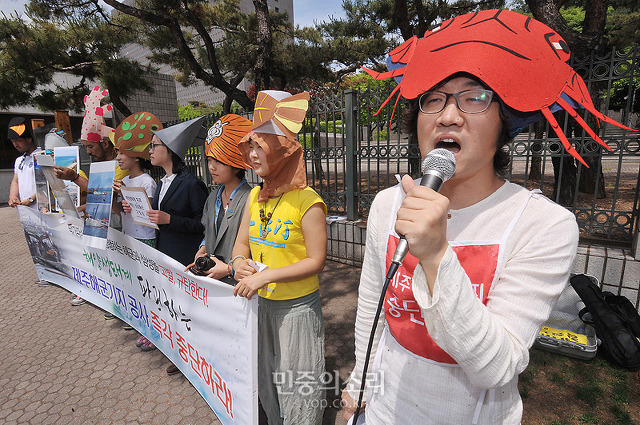 Jo Yak Gol, member of Hot Pink Dolphins and a peace keeper of Gangjeong speaks during the conference on May 31. (Source/ Original Source: Voice of People, May 31, 2013)

According to Jang Hana, National Assembly woman: “The navy’s behavior of contaminating the sea ecology system in the Gangjeong Sea, by its dismantling process of damaged caissons underwater, bringing the very poisonous cement powders and concrete lumps in the sea is in violation of item 2 of article 22 of the maritime environment management.

The item 2 of the article 22 of the maritime environment management defines that “nobody should leak contaminating material that occurs in the maritime space such as maritime facility, beach resort, and mouth zone.” The punishment for the violation of it is up to  two years’ imprisonment or up to 20 million won fine.

The people also reminded that when the World Conservation Congress was held in Jeju, 2012, there was a controversy of environmental destruction on the damaged caissons by typhoons.  At the time, Captain Yoon Seok-Hwan stated in the press conference, that the navy plans to “float damaged caissons and then dismantle and dispose those ON THE LAND or dispose those in the ways not badly affecting environment. We will NEVER use the way such as underwater blast.” (See a Korean article, here) . 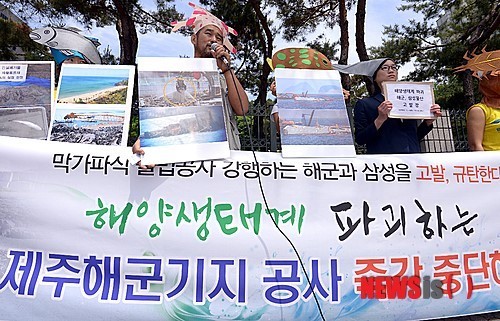 Go Gwon-Il, Village chairman of the Stop the Naval Base Project speaks during the press conference on May 31. The banner reads, ‘Immediately stop the Jeju naval base construction (destruction) that destroys maritime ecology system.  ‘(Source/ Original source: Newsis, May 31, 2013)

However, that promise has never been kept. The navy is openly dismantling those caissons ON THE SEA, carelessly blowing out poisonous cement powders and lumps into the sea. Its disastrous result could be seen on the SOS teams’ May 15 video.   “Even though the navy and Samsung say that they would dredge the cement on the sea bottom, there is really no way to dredge all the chopped-up parts of cement because those powders are spreading far into the sea by the strong currents of the Gangjeong Sea. It is already illegal to throw down concrete cement, poisonous waste, into the sea.”  (from people’s accusation document)

It is a vivid scene of navy’s illegal dismantling of damaged caissons on the sea, which started on May 5. (Video by Moetppuri Park, edit by Ryu Dong-Kyun)

Seven caissons were destroyed by the typhoons such as Bolaven on Aug. 29, 2012. The whole production costs of those caissons are 35 billion won. The ROK Ministry of Construction and Traffic has concluded in 1998 that the caisson construction method is impossible in the southern part of Jeju, after the result of a year’s investigation. It is because of severe typhoons and currents to the total destruction of harbors in the Seogwipo area, the southern part of Jeju. (See the recent Korean article, here). Especially, the Gangjeong village is of a protruded out geography in its coast. The villagers have warned the navy numerous times that the village geography itself is impossible for any huge harbor, not to mention naval base. Despite that, the navy has enforced the construction (destruction). It is only forthe profits of big corporations such as Samsung.

‘While heavy metal-poisonous materials such as  leaking earth and sands, concrete lumps and cement powders are injected into the sea as they are by the illegal naval base construction(destruction), the silt protectors never properly work because of unreliable installation and restoration of their damaged status… The Gangjeong Sea where the endangered species such as the Indo-Pacific bottle nose dolphins, red-feet crabs, soft corals have been playing is being killed. There hardly is no trace of living creatures in the bottom of the sea. Only sediment materials can be touched. The damage on the fisheries by the illegal naval base construction (destruction) is extended into Beophwan and Wolpyong, nearby Gangjeong’ (SOS. Source)

You may painfully compare the above video with the below which was taken in 2009, before the destruction of sea by the naval base construction.

(3) Illegal quarrying, transportation, and reclamation of sand and stones.

(Video by Kim Bok-Chul, edit and arrangement by Dungree(Park Sung-Soo)

The Jeju naval base project is already infamously illegal in the sense of dual MOU, violation of EIA, violation of law on the cultural treasure, layout flaw, manipulated fake simulation. It was disclosed by a construction worker last October that the Samsung C & T is building unreliable caissons, using the reinforce rods under-standard, which results in easy destruction of caissons by typhoons.

Not only that. The video discloses the illegal quarrying, transportation and land-filling of sand-stones by the companies.

On Jan. 31, this year, a peace activist, Mr. Kim Bok-Chul traced a truck from the Hwasoon port and Gangjeong and found that the stone-quarrying site located in the Mooreung-ri, Daejung-eup, Seogwipo City is illegal. Given the record, it can be estimated that tens of thousands of illegal sands and stones have been transported for 40 days around Jan. 31. Those illegal stones would never properly work in the basic construction of the base.

It has been also known that there are about nine transportation companies of which trucks commonly violate legal speed, freight amount, central line and traffic signs.

Putting sands and stones in the sea is also done in violation of the EIA. The silt-protectors have never properly functioned but rather contributed to the destruction of environment.

The navy and company should stop destruction of nature with illegal methods which are only for reduction of construction costs. The sea is of the soft coral habitats, which are ROK natural memorial NO. 442, as well as the UNESCO Biosphere Reserve.