Samsung workers, Samsung, and the Jeju naval base 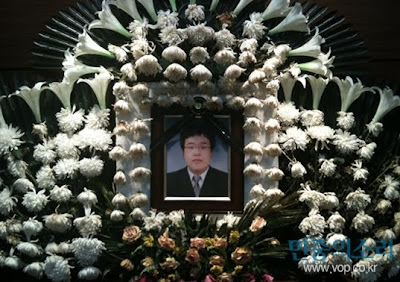 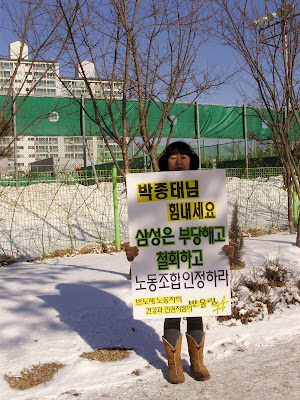 ‘ Workers and activists have been doing relay one-man protest in front of the Samsung factories in Suwon and Cheonan, every Wednesday, to demand the withdrawal of unjust lay-off of a worker who claimed for company’s acknowledgement on labor union.’

Even though, it was Jan. 11 when Mr. Kim Joo Hyun made suicide by jumping from the rooftop of the factory dormitory, his family members are still keeping mortuary where his portrait is still being placed on, demanding acknowledgement and apology from Samsung for the cause of Kim’s death. The investigations on the cause of his death, such as excessive working time and on company’s negligence on his suicide have been still going on as well, the Voice of People reports.

The Stop Samsung blog has reported on Jan. 14:

‘He suffered from skin disease due to chemicals and depression because of severe job stress. This shocking news is even more disturbing since it follows a rash of similar suicides by young workers at the Foxconn factory in China and inspires us to increase our determination to bring justice for the Samsung workers and families. He is the second suicide at Samsung this month! See the article by Elizabeth Grossman HERE for more background and details. In memory of Kim Joo hyun, we ask that you join the Samsung Accountability Campaign on the Causes page HERE.’

For Samsung workers’ occupational deaths and protests, see HERE and HERE as well.

Samsung is not only infamous for its no-labor union policy but also for its omnipotent abuse of power throughout South Korea. The Republic of Korea is called as the Samsung Republic in satire.

Samsung is also involving in Korea Aerospace industries along with Hyundae (The current president Lee Myung-Bak is originally from Hyundae) and Daewoo etc., producing and exporting many weapon systems, for example its branch, Samsung Tales, the South Korea’s leading maker and exporter of naval combat systems.

It has been alarming when the Jeju media (Jeju Sori1, Jeju Sori 2, Media Jeju) reported that the Jeju Island government had made contract for partnership with Samsung C & T to achieve export of 1trillion won on Jan. 21, 2011.

It reported that the Jeju Island and Samsung made contact to collaborate on scouting for bright export goods, supporting for foreign marketing and inheriting on export know-how for the Jeju Island government officers.

The Samsung C & T is told to be the matrix of Samsung with its total sale price exceeding 10 trillion 876 billion won last year, which is near four times of the Jeju Island budget this year. It was also told that all the information and resources acquired during the process of execution on the agreement conclusion would be ‘absolute secrete.’

Further, the Samsung C & T has made contract with the navy for the naval base construction along with Daerim who is involving the construction on space museum through its consortium. The Samsung C & T is also being involved in KEPCO (Korea Electric Power Corporation) consortium along with the KEPCO, Hyundae and Doosan Heavy Industry, which has made contract with the United Arab Emirates on nuclear power plant in Dec. , 2009.

Jan. 21 was the next day when the Jeju media reported the contradictory decision by the members of the special committee on the settlement of the conflict on naval base, Island Council, who were told to have decided to urge the prime minister for earlier legislation on the revised bill on the Jeju special law which included the support basis on the Jeju naval base, while 40% of the members had voiced on the unjust process on the annulment of the absolute preservation areas in the Gangjeong village.

The Samsung, supporting the drive by the central and Jeju Island government, Jeju Island Council for Jeju being one of the seven wonders of nature, is grasping the Jeju Island, as it has wielded power throughout South Korea. Please watch Samsung. Please boycott Samsung product in your countries and if you can, protest on its oppression of workers and involvement in the Jeju naval base construction.